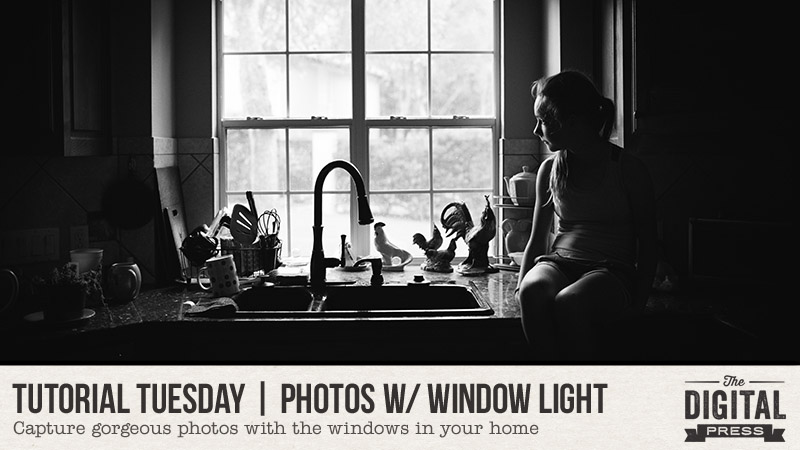 Hello, and welcome to another edition of our Tutorial Tuesday series here on The Digital Press blog! Today, I’m here to show you ways that you can capture photos using the light from the windows in your home.

Have you ever avoided taking photos in your home because the lighting isn’t great? Or looked around and wished you had gorgeous natural light flooding in, as with the beautiful homes we see in magazine spreads? Me too! I love our current home, but it has several rooms that are rather dark. As I eventually discovered, myself, window lighting has so much potential — even if it’s hard to see at first.

A few tips before we begin:

I love our kitchen, but it’s dark. There’s one window behind the sink, but it only gets indirect sunlight and the rest of the kitchen pretty much stays in shadow… 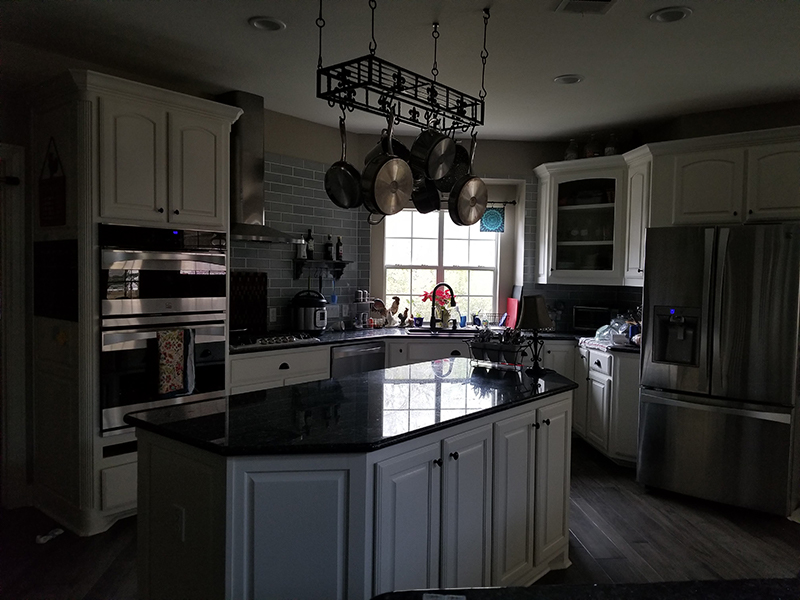 While it’s true that good light makes an image, the same can be said for shadows. Having both shadow and light gives much more depth to an image,  and shadows can help hide the junk in the background that you don’t want to see anyway! As you’ll soon see, this kitchen window has become my absolute favorite spot to capture photos in my home.

Once I even had to stop mid-chop to capture a photo of cilantro as I was preparing dinner! 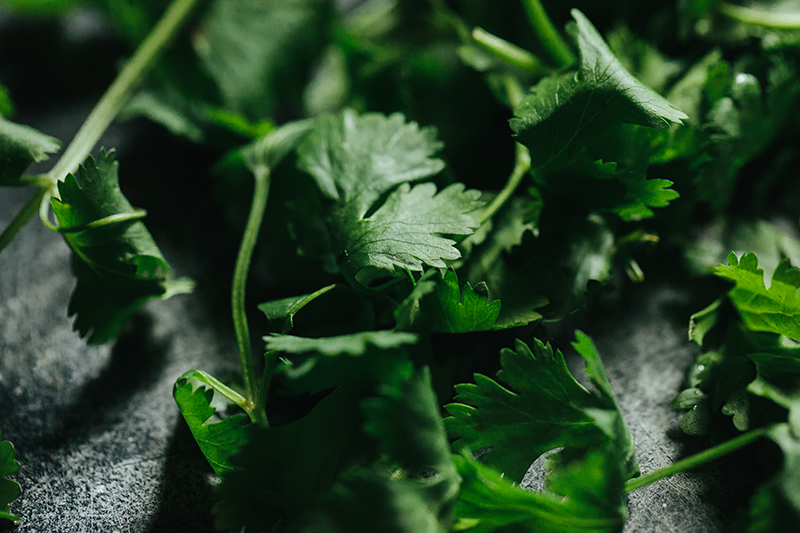 Now that we’ve focused on figuring out where the light is… let’s explore all the ways we can utilize the windows in our home to capture amazing photos.

Photograph At An Angle To The Window

Here is my son standing in front of the kitchen window, and my left shoulder was toward the window. Notice how the light falls off and the right side of his face and body is in shadow? 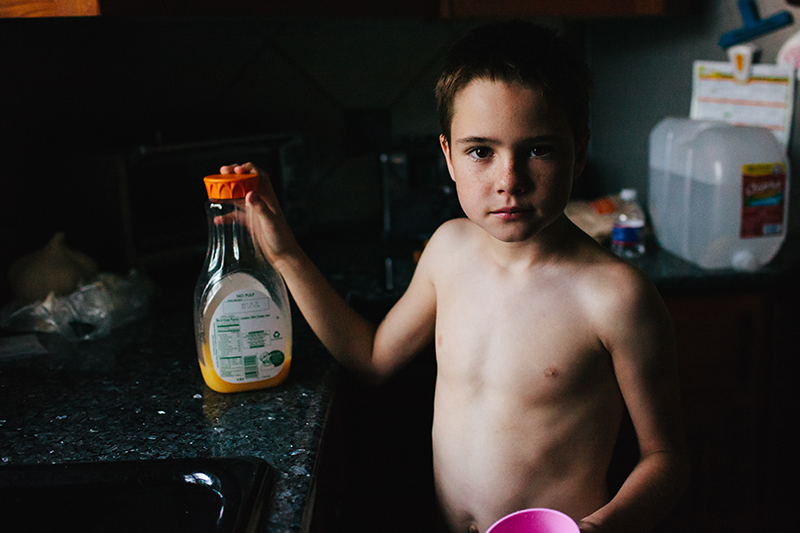 Here are two more examples using the same kitchen window. I placed these flowers in a cup on the kitchen floor and pulled out my macro lens! I love how the light just kisses the flowers and then dies off, leaving the rest of the image in shadow. You can’t even see the floor just a few inches below. 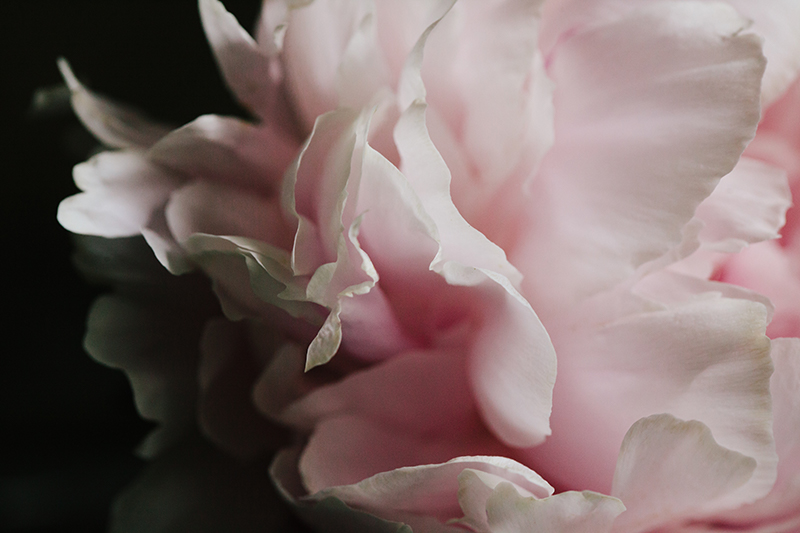 *TIP* If you do product photography, for an Etsy shop or another type of online sales listing, consider using lighting like this! 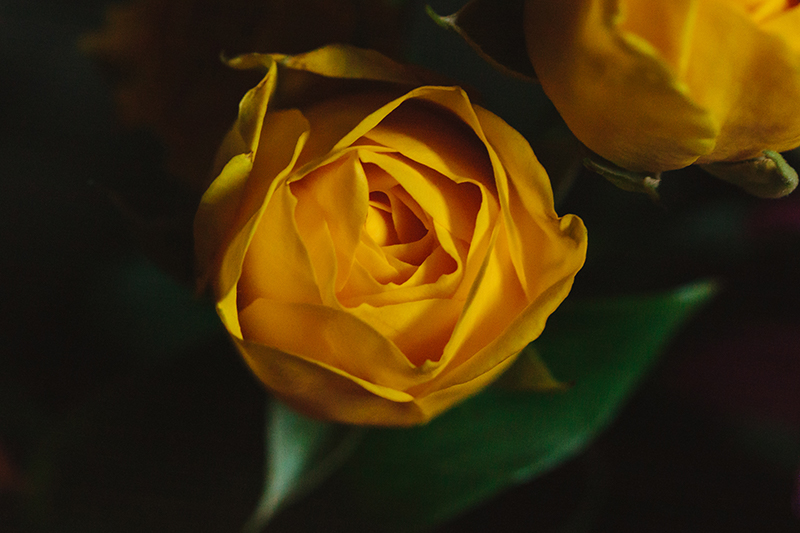 And just to show that I do have more than one window in my house, here’s my daughter and our cat Tiggy. In this instance, my right shoulder was toward the window. These windows happen to be much larger than my kitchen window, so you can see that the image overall is pretty well lit even though we still have those awesome shadows in there… 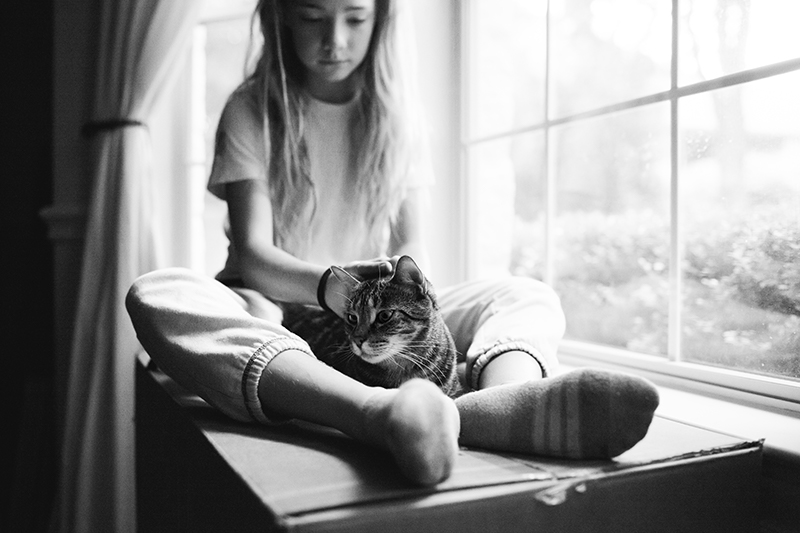 And one more of yet another cat, Pinkie Pie (we have four cats!). This is a window in my daughter’s bedroom… 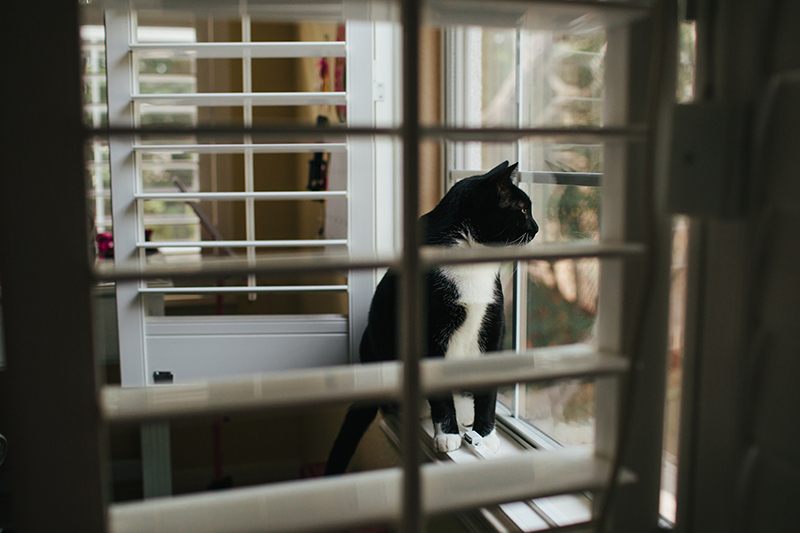 Photograph Straight On To The Window

OK, so now you know how to use the window when you are standing perpendicular to it. But you can also shoot straight on to the window, as well. Here’s another shot of the cats in my daughter’s window… only this time, I was directly facing the window… 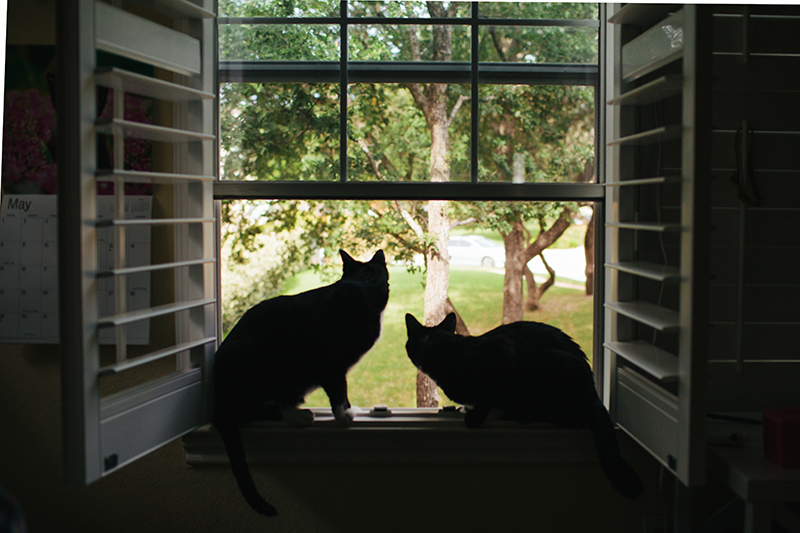 This presents challenges, as the outside will often be much brighter than the inside. In this example, I used the meter of my DSLR to set the exposure for the front yard, which resulted in the cats being in shadow. I focused on their ears so I could capture the outline of their ears in focus. I think this works because cats have a distinctive silhouette and this lets me tell the story of two cats staring out into the trees in the front yard.

And now, back to my favorite kitchen window. You’ll notice my kitchen’s a mess, dishes all around, even a dead plant off to the left! I want my kids to look back on our photos and connect with what they see, so I don’t stress over clutter or creating a perfect frame. I just had my daughter hop up on the counter and I snapped this. Took just a few minutes! 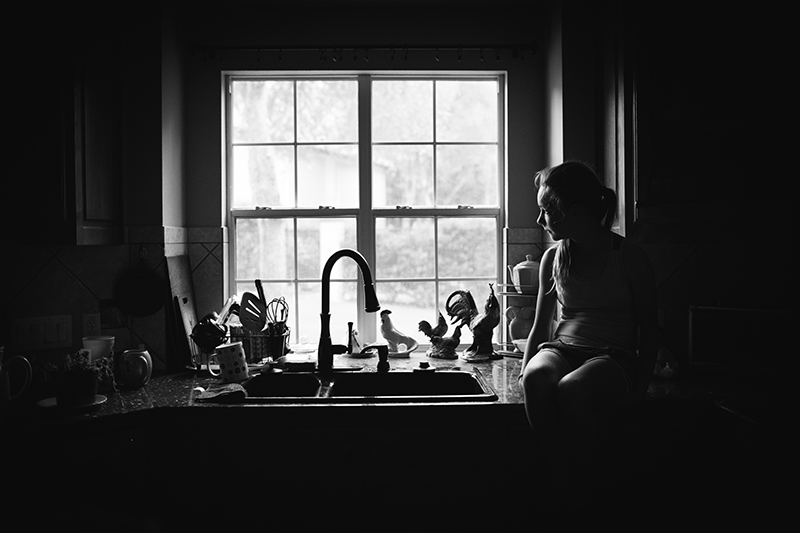 A few things to note:

Get Out There And Practice! 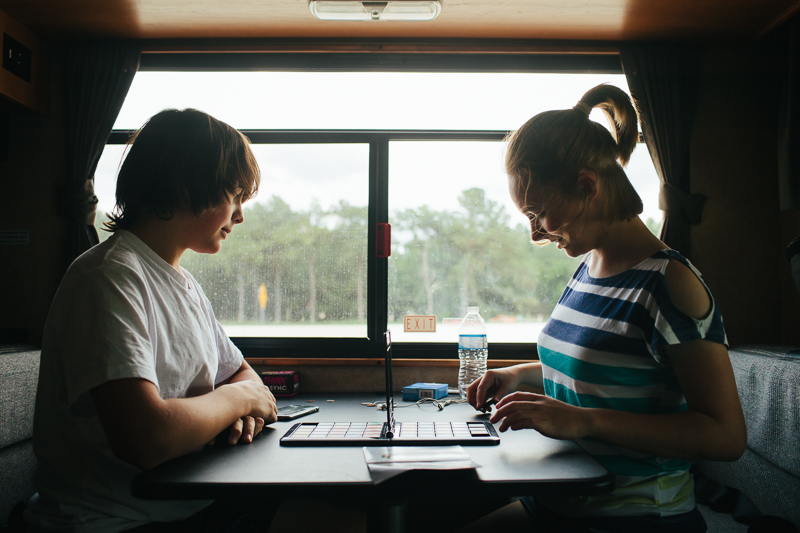 Once you learn to manage window light, you’ll see opportunities everywhere! At stores… restaurants… even in campers! 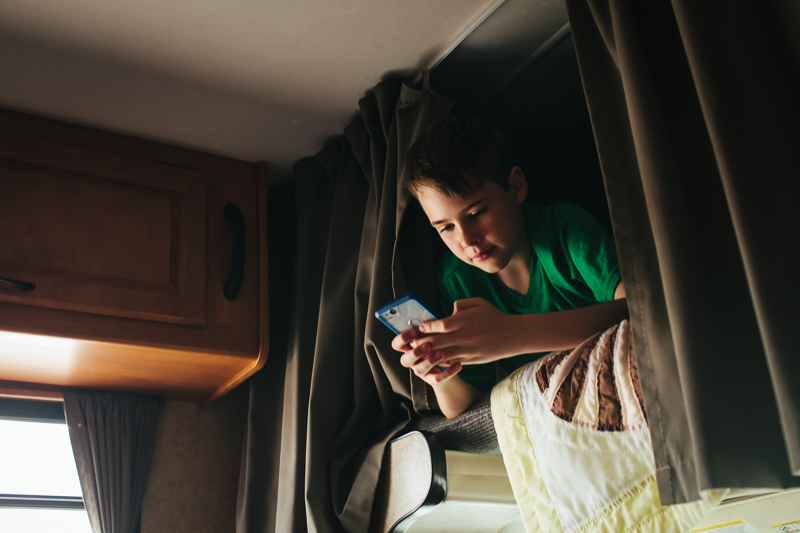 There’s no substitute for practice. If some of these techniques seem confusing, pull out your camera and try to replicate the setups from the sample images. I’ve been known to use a doll in place of a child because the doll listens to my directions much better than my kids do. As you practice, really focus on “seeing” the light and shadow, and notice how small changes in positioning can make a huge difference in the impact of the photo.

A few things to consider:

I hope that I’ve inspired you to try using window lighting in your home in new ways when taking photographs. I’ll be back later to show you tips on creating amazing photos using the artificial light in your home!

About the Author  Beckie is a creative team member at The Digital Press and who lives near Austin, Texas. In addition to scrapping and photography, she enjoys spending time with her family, reading, and ignoring household chores.